At first definitely was not in my itinerary, never heard of the place before until Adam the American dude I met in San Gil proposed this place before we're heading to Guajira.

Same old story, you meet people and the next thing you knew you threw your old plans out of the window. Although looking at the map, going up to Guajira via Valledupar is more make sense, so you don't have to do a backtrack trip from the coast. But the downside is ( big downside ) we had to carry our big backpack while we're in Guajira. That part doesn't make sense, since Guajira is desert and beach. I only used 2 tiny shirt, bikini, sarong and short while we're there during a week trip hence my backpack was a big annoying burden.

It took us 12 hours to get to Valledupar from San Gil. We took night buses as usual and had our sleep in the bus. Since this town is not a common tourist destination. There's limited recommended hostel. We stayed at Providencia hostel together with pretty much everybody who travel through Valleydupar.

I didn't expect much about this place, but on the first day at the hostel we met another american couple who's going to take some picture of the cockfighting in the neighborhood ( serious picture with his serious camera. My big camera looked like a tiny disposable camera compare to his ) Adam was beyond excited as he always wanted to see it. So we spent the whole afternoon checking the cockfighting arena, which actually it was just on the side street under a huge tree. The rest of the people were hanging around on the street on sunday afternoon, or some people who owns the rooster is preparing them at 'backstage'. I'm not a big fan of cockfighting so I only just hanging out with the people around taking photos with occasionally some cheers and roar from the cockfighting arena betting on the roosters.

Valledupar is the birthplace of Valenato music, Daniel the american dude had a tatoo of acordion and the main reason he came to Valledupar to make documentary about this valenato music. The same evening we went to some music celebration, they called it pre carnival. So basically they're partying a month before the real carnival. Sure they know how to party. So we just hang around and using the occasion as an excuse to drink and eat some street food. 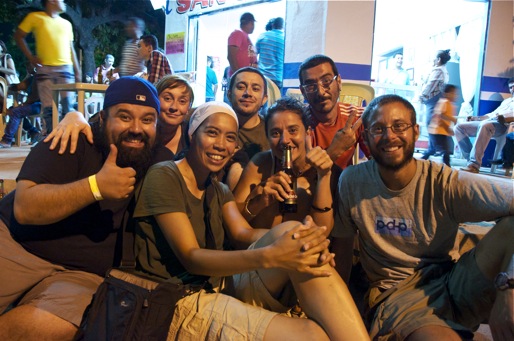 The top highlight of Valledupar is swimming at the river. Located southeast of Sierra Nevada de Santa Marta, many rivers descends from it peaks through Valledupar. Honestly I'm not a big fan of swimming in the river, since our river back home is kind of brownish color for many reason. At first we went to the Guatapari river during weekend, and man oh man the amount of people swimming in the river is a new sight for me. Other places people go to the beach but Valledupar doesn't have beach, they only have rivers. And the water is so fresh and clean. The so not big fan of river went swimming at the river every single day while she's there! Quiet streets, trees all over the town was so green and perfect for us to cycling to the river.

One more place we visit is La Mina, a natural swimming pool. About an hour away from the city by shared jeep. Amazing huge rocks created a hole with crazy beautiful water to swim. But the catch is there's no transport back to Valledupar, so we had to hitchhike. During my travel in South America I had some luck when it comes to hitchhiking, being optimist I told the group that I have the luck. And hey what do you know, within minutes after we reached the road from the river. There's a truck enough to accommodate all of us at the back all the way to Valledupar. 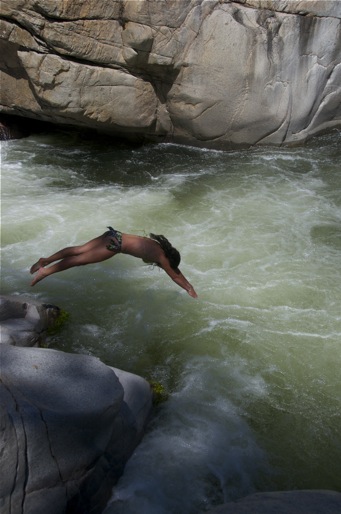 One last highlight I have to mentioned and have been mentioned before on my previous post is 'Frutas con Helados' which simply fruits with ice cream. Yes it was our dinner two nights in a row, could be three nights or four nights if we found out about it earlier.

We had an unexpected treat from Valledupar, a green city with rivers, the people are amazingly friendly, other tourists are almost nonexistence, shouldn't be missed.